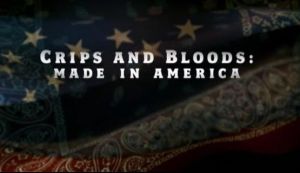 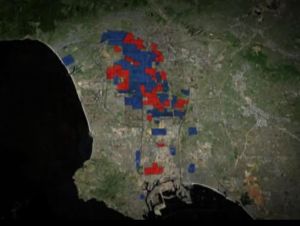 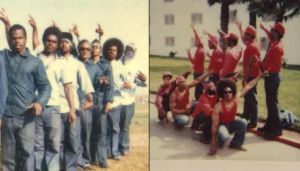 SLAMDANCING IN A FAST CIY
By Robert Keating

Call them creeps, street survivors, skinheads, or slammers. In today’s explosion of post-punk violence, L.A. teenagers are no longer playing end games – for them the apocalypse is now.

Mike’s Suicide got a narly sweat. After clearing the dance floor at the Starwood, he stands in the middle, looking for someone else to hit. It’s hot as hell. The club’s packed tonight – with boys, mostly. Boys wearing leather and chains. Torn jeans. Or maybe a Scottish kilt. Bandanas are tied low on black motorcycle boots. Some boys have Mohawks. Blue, green, orange, spiked hair. And crew cutts. Tonight packed into a room of pounding music, there are crew cuts everywhere. You’d think half the punks in Hollywood were here. Even so, for ten feet on all sides of Mike Suicide, there’s no one left to hit. So as the band ends this song, he moves back into the pack of bodies that had formed the circle. A kid steps up and asks Mike why he threw that one guy into the wall across the room. “What did that guy do?” demands the kid, maybe twelve with blue hair and a beer belly. Mike ignores him. The guy he threw is Mike’s best friend. His next-door neighbor.

“When I go out there” says Mike, “I go crazy. I don’t care. I just want to fuckin’ kill somebody.”

Mike Suicide’s a surf punk. A skinhead. A creep. A survivor. He says he’s a Fascist. Built like a highscholl linebacker, with his head practically shaved, he’s one of the new breed of Los Angeles punks. Tough, athletic kids from outer areas. Orange County, the Valley and beach communities, along the coast. They’ve arrived in Hollywood to announce the end of punk rock. A punk Dämmerung Tuesdays at the Starwood are their favorites nights. A fortresslike club that takes up an entire corner of Santa Monica Boulevard, surrounded by nude shows, male prostitutes, and porn shops down in West Hollywood. During concerts the courtyard and street outside resemble a backlot for a sci-fi flick. Not everyone who is seen at these gatherings is a creep or a survivor. Many just go to see the show and get caught up in the action.

Tonight, on stage, China White is playing. Loud heavy metal rock. The human ring that collapsed under the pressure of the crowd forms again. And two skinheads, with their T-shirts dangling like tails from their belts, skank onto the floor. They’re bent forward at the waist, arms swaying front and back at their sides. Cruising, heads up, looking for comers. And one by one they come, these boys. Maybe fifty of them in T-shirts, motorcycle jackets, or bare-chested in the sweltering heat. All bent forward at the waist, jerking their arms up and over their heads, spinning in time with the music. There are knees and elbows everywhere.

It’s called skanking. The HB Strut. Slamdancing. It’s a cross between a cockfight and the Roller Derby. Bodies bash and twist and smack and jam together. The contact is stinging. The dancers wear a lot of scars. And the energy in this pit of flesh and sweat is brutally sexual, though few of them will admit it.

“When I go out there.” explains Mike Suicide, “I just knock people over. I do one, two, three-person next me, throw ‘em. Spin around, hit elbows. Stop. Person. Throw ‘em outa the way. And pretty soon you’re by all by yourself.”

Mike’s elbows have bumps all over them from hiting so many people. He thinks they’re “permanently, totally deformed”. “When he gets home after a night of slamming, they’re swollen and blue. The next day he can’t bend them. And every once in a while he has to get blood drained out of them. Mike’s nose has been broken eight times.

“You’re not going out there to fucking have a party”, he reasons. “You’re gonna hurt someone and you know it.”

Tonight, between sets, a voice on the public address asks. “Keep violence to a minimum”. Still, a fight breaks out between two groups of skinheads on the floor. The music stumbles to a stop. And the lead singer leans forward on the stage pleading. “Fight, don’t dance”. A white spotlight is thrown on the brawl, but the bouncers manage to break it up.

During the last set, these creeps have some hippie on the floor. Before the bouncers could get to him and drag him away, a couple dozen MC boots had pretty well bloodied the kid up.

“It’s nice to have somebody down there and fuckin’ kick him and not worry about getting hit”, says Mike to a guy he lives with in a beach shack in Venice. “Once you’re on the group, you’re dead. People don’t care. They just wail away. You get courage when it’s a hundred to one.”

The two stand with their friends at the edge of the circle, scanning the pack of slammers, looking for targets. The bouncers, meanwhile, are busy trying to keep the crowd from taking stage dives. But the crowd does it anyway – climbing up and then crashing down onto a sea of heads and flailing arms before rolling to the floor. Mike spots some ass smiling and going crazy on the far side of the room. He says he doesn’t trust anybody who smiles at a gig. Mike turns to his buddies:

What did you think about that Penthouse article?

Mike: It was pretty good from a fictional point of view, it was interesting but it was all lies. The magazine isn’t out there for articles, so the articles they have they have to make interesting. The stuff I supposedly said I didn’t even say, it goes right back to like that National Enquirer… and a lot of the stuff he had other people saying, I said. I was pretty funny. This guy when he first came up to me, I agreed to do it but I didn’t get paid or anything, nothing I could appreciate, when it came out it did make me look pretty bad. It was a farce. That guy went to one show and tried to be an authority. If I was reading it I’d be scared and make my kids stay at home. That was my first experience with the press, otherwise I wouldn’t have done it… it came out like over a year after that guy talked to me 0 he only came over with a little notepad so he couldn’t really quote me verbatum anyhow… 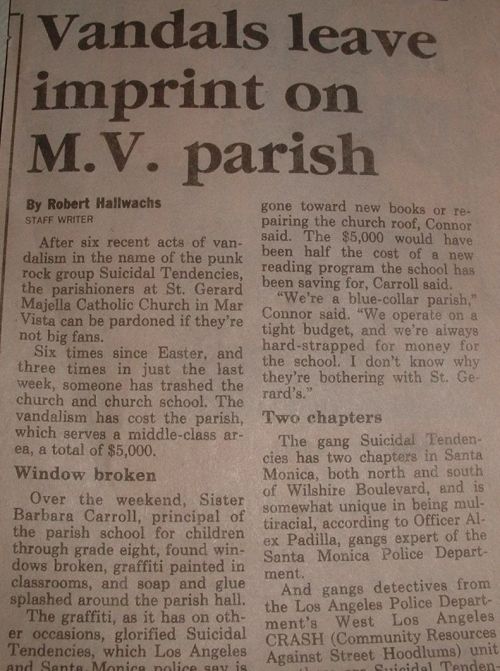 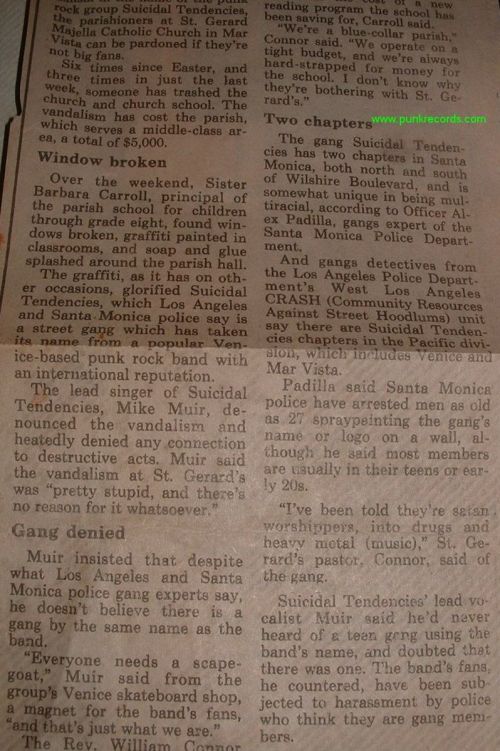 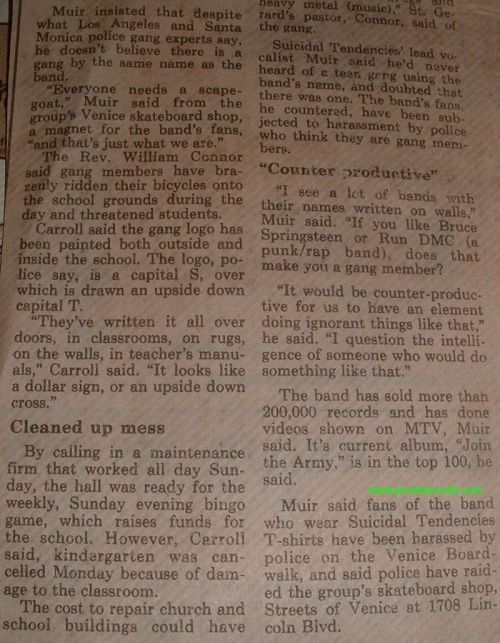 I think Amery told them about me. My first band was with Amery and Bob Heathcote who also played in ST at a different time.

A little bit of both. We played a riot in Huntington Park.We were playing with The Exploited. The club could hold like 700 or something like that, and there was like 1.000 or 1.500 trying to get in. Police came in while we were playing and said stop or we were going to take everyone to jail and are gear would be impounded. We got the drum case with the keys to the big 4 door Chevy Pickup Amery’s dad had stolen. So we had to push it down the alley, take are shirts off and try to blend in with the locals, because cholo’s were stabbing people that looked like punk rockers. Amery’s sister, Dominy, finally brought the keys. But we got hit by nightsticks by the cops. It was insane.

Maybe some people might have had friends that were bangin but I don’t know.

I was stupid. I thought nobody appreciated my musicianship. I thought the people were there just to bash someone’s face in. Grant learned my demo then recorded the record. Oh, well, that how it goes sometime. It was super fun, played some crazy shows.

I’m cool with Muir. I talk to Clark all the time and I’am friends with Dean. It’s all good. One of my best friends is Robert Trujillo. 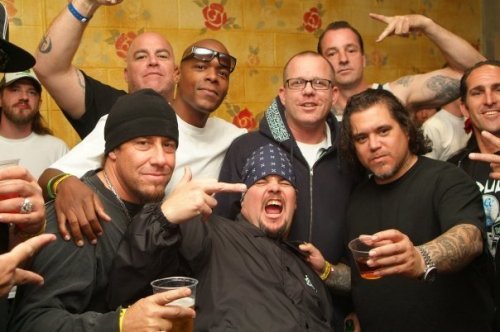 I have a studio and still play guitar everyday. I never stopped. I’m down to play in a cool band. I have been recording with Amery and Louie a bit. I surf and love life. 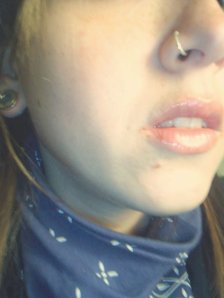